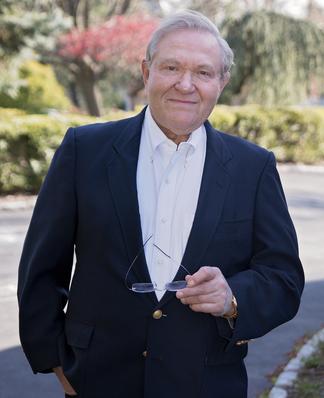 Michael is one of the youngest survivors of the Auschwitz death camp. At the age of four, he managed to stay hidden and evade murder in the most notorious death camp in world history. Photos of Michael being liberated by Soviet soldiers at the camp have been spotted on museum walls, book covers and film clips around the world and yet he waited more than seventy years to step forward and share his story.

He wrote Survivors Club alongside his third of four children, Debbie, who is a broadcast news journalist and a writer. Along the way, he and his family were stunned to uncover shocking new details about his survival that included a bribery scheme, untold acts of kindness by a German leader, and one perfectly-timed brush with illness.

Michael is a graduate of Fordham University in New York and holds a Ph.D. in Pharmaceutics and Analytical Chemistry from the University of Iowa.

That’s where Mike met his wife of nearly fifty years, Judy.  Together, they have raised four children (Lori, Scott, Debbie and Lisa) and welcomed twelve grandchildren to their ever-growing family.

Michael is now retired after working for more than four decades as a scientist and researcher in a career that took him from Dow Chemical and Eli Lilly & Co. in Indianapolis to Biotech divisions of Johnson & Johnson in New Jersey. He rose to the rank of director of technical operations and focused the majority of his work on helping to develop life-saving antibiotics, growth hormone and cancer treatments.

In addition to occasional consulting work, Michael now spends much of his time shuttling between New York and New Jersey alongside his wife as they visit grandkids’ science fairs, dance recitals and soccer games. He also speaks regularly at schools, synagogues and business institutions, sharing his experiences as a survivor of the Holocaust.